Plants of the Pacific Northwest coast

For the past quarter century since its publication in 1994, this has been—hands down—the most often-opened book in my library. It’s not only in my ‘physical library’ but also in the elite subset of books I can reach without leaving the computer. Even more than Sibley’s Field guide to birds of western North America, the North Pacific plant book, what most of us refer to as Pojar & MacKinnon—the 2 lead authors—has become indispensable. The farther I stray from Áak’w & T’aakú Aaní, where even a leaky brain like mine eventually commits to memory the names of most vascular flora, the more I depend upon this guide. I remember a trip to Alaska’s southernmost extremity with Koren Bosworth, one of our region’s most experienced wetland delineators. In K’ahna.àan (Portland Canal), she kept falling behind—unusual because she usually walks the legs off me.

Turning back, each time, I’d find her standing in the bog, flipping the pages of her Pojar & MacKinnon, which has a permanent home in her field vest, trying to identify an unfamiliar southern species. Koren’s P&M is the only copy I’ve seen more dilapidated than mine. She can’t buy a new one because her original is stuffed with taped-in specimens.

My copy of P&M-1994. A second edition was published in 2004, but frankly I don’t see much new in it, and like Koren I’m loathe to upgrade because of all my specimens and margin-scribbles.

At the back end of Pojar & MacKinnon you’ll find thumbnail portraits of its 10 authors—all Canadians except for former Alaskan Paul Alaback. Only such a team of biologists could assemble a guide so sweepingly comprehensive that nothing could displace it in the North Pacific rainforest bioregion for 25 years. Plant diversity declines northwestward through this bioregion: Oregon, Washington, BC, and SE Alaska, so it’s quite unlikely you’ll find a species up here that isn’t treated in the guide. The combination of color photos and line art is unbeatable, and range maps make for fascinating biogeographic comparisons. It even has lichens—thanks to Trevor Goward—and mosses & liverworts thanks to bryologist Dale Vitt, author of Mosses lichens &ferns of NW North America, also published by Lone Pine.

But lately, the reason I keep coming back to P&M is for the contributions of ethnobotanist Nancy Turner. Discovery Southeast (formerly Alaska Discovery Foundation) has a long history with Nancy, though it would be 20 years before I actually met her. In the mid-1980s, Scott Brylinski and I began offering summer overnights at Scout Camp on the theme of wild edibles. Our bible, even then, was Nancy’s Food plants of British Columbia Indians: Part 1/Coastal peoples (1st ed, 1975). In those days, memories of elders extended well back into the 1800s, and gathering traditions were still intact. Here’s an example, from an entry on the fern Dryopteris:

“The large, ‘pineapple-like’ rhizomes were dug by the Kwakiutl, Bella Coola, and possibly the Tsimshian around the end of September. At this time they are surrounded with scaly, finger-like projections, which are actually the beginning of the next year’s growth. If these are flat and dark inside, the rhizome are not good, but if they are round and fleshy and light-colored, they are fit to eat. They were cooked in steaming pits overnight, or steamed in kettles. The Kwakiutl sometimes covered them with red ochre and roasted them on a hemlock stick over an open fire. The ‘fingers’ were broken off, peeled ‘like bananas,’ and eaten with eulachon grease or stink salmon roe. Some Indian people compare their taste to that of sweet potatoes.” 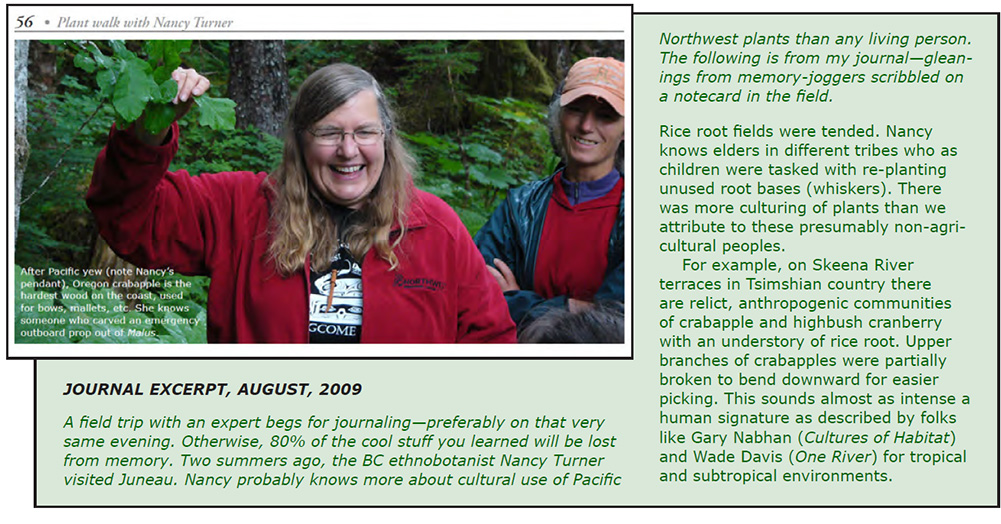 In the 2011 fall issue of Discoveries, my article on Field journaling included this sidebar on a plant walk at Eeyák’w, small rapid (Amalga Salt Chuck) with Nancy Turner, goddess of Northwest ethnobotany.

I hesitate to say this—and old-school bibliophiles will hate me for it—but the only way P&M could be better would be if Lone Pine published a digital version for cell phones. Because dang it, there’s always that time we stubble across a new (or forgotten) plant, and the physical copy is home on the shelf.