You break it, you fix it

In July, 2018, I flew to Tàan, sea lion, (Prince of Wales Island) to help The Nature Conservancy document “restoration” activities on a tributary to Sdéini Héeni (Staney Creek) that was heavily logged in the early 1970s.

Although I was impressed with the skill and dedication of streamworkers, I’m actually not a fan of the label “restoration” for what we’re doing to repair damage to streams and forests. “Restoration” feels misleading, even a bit arrogant. It implies we have the knowledge and resources to return habitat to something at least approximating its pre-damage condition—when we usually don’t even know what that was.

But my reservations are unlikely to sway practitioners in this growing profession. And I confess to coming up blank, so far, in the search for a more logical title. In some, but not all cases, “stabilization” is closer, as when EMTs apply splints and bandages to patients who’d otherwise expire in the ambulance. “Rehabilitation” also seems less grandiose. And “reparation”—amends for a wrong one has done—is even more modest, though perhaps less appealing to funders.

Above: Sdéini Héeni before log placements. Channel straight and uniform. No large wood or pools. Little cover for rearing fish. ●  Below: One year after logs were embedded with an excavator. Nice plunge pool forming downstream of foreground log. More cover, and abundant rearing coho in July. Stream probably deeper on average during equivalent flow levels.

“Restoration” is a cultural activity, perhaps more restorative to human communities than to nature. This in no way lowers its value in my estimation. As they say in the pre-flight safety lecture; put on your own oxygen mask first, before assisting others.

As for the ecological consequences and implications of restoration, I’m developing a parallel sub-category under Nature>Ecology 101>Resilience & fragility. One of the great lessons of attempted restoration is identification of forests, tundra and coral reefs—inconceivably ancient and conservative systems—that once broken, basically can’t be fixed in humanly meaningful time frames. Much of what we’re bandaging today is resilient habitat, such as the scrappy, bounce-back alluvial forest. That won’t be so uplifting for restorationists of 2050, aghast at what we’re doing today to elderly red- and yellow-cedar forests, on public and corporation lands. 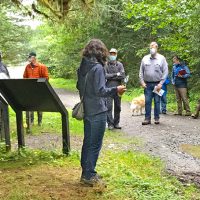 Stream work documentation on Tàan, sea lion (Prince of Wales Island) The Nature Conservancy, US Forest Service, and dozens of…

Presentation for Evening at Egan On November 9th, 2018, I gave the second in a series of 4 lectures for…

In 2009, after several years of cruising the Tongass timberlands under the auspices of Sitka Conservation Society, I wrote them…

About a decade after Discovery’s founding, we began collaborating with stream restoration initiatives. I served as a liaison between researchers…

Reflections from our 2007 field surveys of northern Shee, volcano woman (Baranof Island). Covers history of logging in the province,…

Forest restoration in the Tongass: Why, how, and where