Outer Islands biogeographic province is a farflung unit of only 330 terrestrial square miles in the Alexander geologic terrane. Temperatures are moderate year round in this province. Sea-level snow is rare and transient. This was home to Takjik’ Àan Kwáan on the north and Hinyaa Kwáan on the south. The most dramatic coastal landform I’ve ever seen is Tàan Téix’i, sea lion heart (Cape Addington)—a granite-tipped limestone peninsula jutting 4 miles into the open Pacific.

Few Lingit place names survive on these islands, which instead abound in Spanish and Russian IWGNs (important white guy names). That’s due in part to the phenomenon of ‘first-seen, first extinguished’. Earliest Spanish sailing ships in the 1770s couldn’t negotiate inside waters, so the first horrific visitation of small pox was upon outside peoples where vessels anchored, such as Taakw’aan, winter village (Warm Chuck Inlet)

The province has been intensively high-graded on Heceta, San Juan Bautista and Suemez Islands, but only lightly logged on other islands. About 6.3% of the province is mapped as large-tree forest, while 8.6% (former large-tree) has been logged—third highest %-cut for any Southeast province.

Tertiary basalt columns at Yáahl K’yuu Xagatdáa, Raven’s eye on the door (Cape Felix), ice-free during last glacial maximum. Obsidian artifacts from volcanic formations upslope have been found 140 miles away in archeological sites as old as 10,000 years, indicating extensive trade not long after glaciers receded from the region. Photo by Alaska Shorezone. 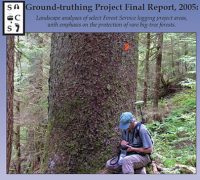 The Ground-truthing Project, sponsored by Sitka Conservation Society, ran from 2005 to 2010. Kenyon Fields at SCS administered the program,…