In 1985 I was a long-haired hermit caretaking the scout camp at Asx‘ée, twisted tree (Eagle River). Not a fan of civilization, I was nevertheless conscripted into environmental consulting by a remarkable streamwalker named Dan Bishop (Discoveries, Fall 1999 issue). Somewhat of a dropout himself, Dan had left his position as Tongass Hydrologist, USFS, to start Environaid—through the 1980s, Lingít Aaní’s most respected “land-&-water” consulting firm. Sometimes that respect was a little rueful; whether developer, regulator, or environmental advocate, you knew this guy wouldn’t bend his findings to your needs.

Dan’s early death in 1991 left a hole, not just in lives of family and friends, but in the relationship of humans to this archipelago. By example (not by preaching) he taught his “associates” to speak for habitat. We also laughed a lot. 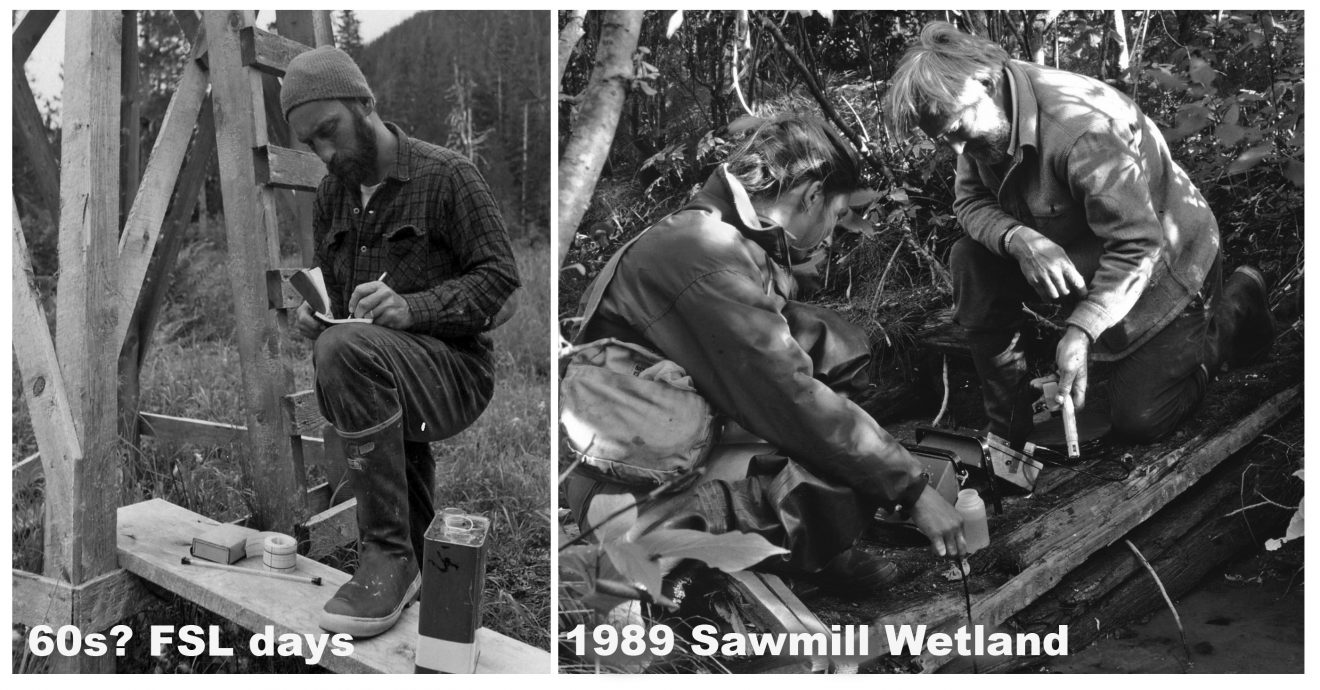 Left: Photo from USFS archives, when Dan worked at Forestry Sciences Labs.   Right: Dan and daughter Gretchen on a stream near Haines airport, on contract for ADOT.

One of Dan’s regrets was the fate of Environaid reports—so carefully researched and assembled yet often commissioned by hoopjumpers who filed em away (or not!) in rarely-opened archives. The main beneficiaries of Environaid reports, Dan said, were we who got to experience and describe these wondrous, wounded places, from Jilkáat, (Chilkat country) down to Tàan (POW island).

I hope to expand that tiny list of bushwacking beneficiaries. Recently, Dan’s daughter Gretchen brought by half a carload of 30-year-old+ Environaid documents, and original copies of their associated maps and images. At Discovery, our goal is to ultimately scan, digitize and post the entire, priceless, Environaid report collection. OCR (optical character recognition) may be impractical for most of them because the Bishop family’s early dot-matrix printer cranked out blotchy letters inducing ~2 typos per line. My OCR app routinely mistakes a for e, and l for 1.

But for my first ‘reconstituted’ report, it was worth the 4 days of ‘flatbedding,’ reformatting and blooper-sweeping. I’m referring to Bishop, Armstrong & Carstensen (1987), the notorious airport expansion study. Long lost and lamented by Southeast wetland aficionados, this baseline study is finally resurrected in digital form, complete with irreverent commentary by the junior author.
Enjoy!